Select a language to view our site with

Mojca first graduated from the Faculty of Physics, and from the School of Fine Arts - Sculpturing at the same time.

From the beginning of her high school years, she was interested in the boundaries and possibilities of human consciousness. She first sought answers in Sri Aurobindo's and Krishnamurti's ideas and philosophy. Through his ideas, she began to practice yoga, especially pranayama. She also began to learn about Buddhism and the practice of getting to know herself through meditation. A happy coincidence brought her into contact with Carlos Castaneda's books. At first, these were just interesting stories, beyond the boundary of the possible, fiction, and legend. Curiosity gave her no peace: she made decisions and attended seminars and workshops organized by Carlos Castaneda, Taisha Abelar, and Florinda Donner Grau. Legends thus became a reality or one of the possible realities.

She combined her knowledge of biophysics and transpersonal psychology into Neuro Training - technology that uses binaural tones in a unique way. It is designed as a gym for the brain.

The common thread of all her search is her hobby and passion: freediving. Through freediving, she learned many techniques of self-discovery and met and collaborated with many interesting people, such as dr. Natalia Molchanov and her soon Alexei Molchanov, dr. Oleg Bahtiarev ... Natalia showed her the way to find the balance between freediving as an extreme sport and freediving as an enjoyable activity that opens human consciousness. So they co-designed a free-diving program designed to do just that - Velosimed Freediving as Meditation.

Since 2008 she works as a transpersonal psychotherapist and organizes various holotropic work workshops.

2012 -  completed the second level of the EMDR method.

2015 -  obtained a certificate for teaching the Key Method  and

from 2013 to 2017  - involved in Systemic psychotherapeutic studies. 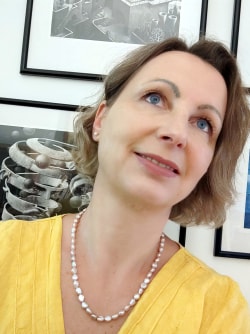